In the network appeared information about the fact that the company NVIDIA is planning to release a gaming tablet Shield. According to a fresh leak, this time it will not be a console and game tablet. 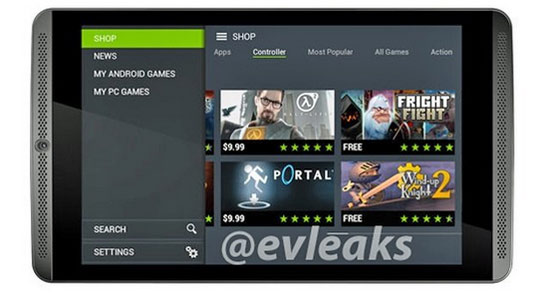 Pictures of NVIDIA Shield , you can see that the tablet will be a medium size, get a metal body, two front stereodynamics and get access to the online store application Tegra Zone.

Also, the network has already appeared the alleged specifications of NVIDIA Shield. For example, the tablet features a 7.9 inch screen and a resolution of 2048 by 1536 pixels, equipped with the top processor Tegra K1, 2Gb of RAM, LTEmodem. It is likely that NVIDIA will be offering additional accessories to this tablet, for example the wireless controller.
It is anticipated that the gaming tablet will support many features supported by the eponymous console NVIDIA Shield, one feature of which is to send video from PC games to the console.
Create a gaming tablet the company is a positive step to revive itself in the mobile gaming market, because NVIDIA was not happy with from the sale of the original gaming console Shield.
Materials hardnsoft.ru